Hiroshima and Nagasaki: Never Again! Never allow nuclear armament and war! — The anti-war anti-nuclear anniversary rallies in Hiroshima on August 6 and in Nagasaki on August 9 have been carving this oath deeply into the Japanese working class and people. It has been a power to prevent the revision of the “Peace Constitution,” war, nuclear armament of the Self-Defense Forces. The 73rd anniversary rallies in Hiroshima and Nagasaki are head-on confrontation with the Abe administration who plans to win the 3rd victory in the Liberal Democratic Party’s presidential election in September declaring revision of the Constitution so that it can submit its draft constitution to the extraordinary session of the Diet after revision of the National Referendum Act.

Down with Abe who robs people of lives
The torrential rain damage that left more than 200 dead in Hiroshima and Okayama etc. is a state crime by the Abe administration that neglected disaster prevention by cutting down budget and personnel for the rural areas while expanding military. With many evacuees suffering under extraordinary heat wave, the Abe government dared to increase the number of Upper House seats and pass casino bill which are both “partisan” measure that prioritizes the needs of politicians, boasting of “Work Style Reform” as “success” although this “reform” would dramatically increase “karoshi (death from overwork)”. They are deploying Aegis Ashore (200 billion yen a unit, doubling the total damage of Hiroshima Prefecture by heavy rainfall) and Osprey military cargo aircrafts and also plans to enforce dumping sand into the sea of Henoko, Okinawa–full-fledged landfill work for a new military base. In Fukushima, they are hiding the reality of exposure to nuclear fallout by exploiting the Olympic Games, accelerating nuclear power plant re-operation. The national security and national interests–a handful of capitalists’ interests–are deemed more pivotal than the lives and safety of workers and residents. The constitutional revision and war preparations are given priority over all others. Opponents are oppressed on charge of “crime of conspiracy.” So this Abe regime of corruption and violence is the culprit that would make tragedies of Hiroshima, Nagasaki and Fukushima again.
“Stop constitutional revision and war! Stop nuclear armament! Down with Abe!”  Let’s make these voices of anger overflow throughout the country starting from Hiroshima. The rallies in Hiroshima and Nagasaki this year must initiate the Grand March Against Constitutional Revision and War of workers, students and citizens.

It is the power of workers who stop war
The history tells us that failing to stop the state’s war resulted in the genocides in Hiroshima and Nagasaki. The road to war was opened when the labor movement and student movement were dismantled and schools and public offices were changed into the agencies for promoting war and mobilizing the youth. After the war, education workers have been fighting with their slogan: “Never send our students to battlefields again” and municipal workers with “Never distribute draft papers.” Their longstanding struggles and above all, struggles of the very men and women who would be mobilized to war–young workers and students–will be the most powerful forces against the constitutional revision and war.
Let’s make every workplace our stronghold. Every school and community also must become our bastion.
Let’s defeat the traitor, such as the union boss of Rengo (Japanese Trade Union Confederation) who agree with the constitutional revision and the “Coalition of Opposition Parties” which utters no word whatsoever against the constitutional revision and the war, in order to change the society by the power of workers and people and abolish nuclear weapons and war! 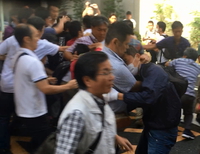