On June 29, National Anti-G8 Summit National Workers’ Rally under the auspices of Doro-Chiba was successfully carried out with 2150 participants. The Metropolitan Police Department banned the demonstration in front of Shibuya railway station and surrounded the rally with a large number of riot police. However, their attempt to suppress the united power of angry workers completely failed. 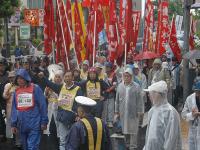 "Come on police! You banned demonstration. It’s OK!" The participants of the rally, shouting loud, broke through the barrier of riot police and rushed into the street of Shibuya. The demonstrators in a tight scrum directed toward the Shibuya station. Riot police and security police were put in defensive. Arrests of 8 people, including workers and students, flared up anger of demonstrators and overwhelmed police repression with ever tightening scrum.

Extraordinary police guard for the security of G8 Summit was completely broken up. On the wrap-up  rally, young workers yelled, "We have won today’s demonstration". All the participants enjoyed the successful demonstration that overpowered police repression. "Workers united will never be defeated". The June 29 rally and demonstration proved it nationwide and worldwide.

Heavy rain could not prevent workers and students from gathering to the rally in front of the outdoor stage of Yoyogi park in a large mass. The keynote speech was delivered by Tanaka Yasuhiro, President of Doro-Chiba, who furiously denounced the extraordinary police guard to defend G8 Summit. He called on the rally participants, articulating, "Anger of working class is on the brink of explosion. Our task is to organize angry workers into unity. Let’s go ahead in the forefront of the stormy age. It’s the mission of militant labor unions."

High-spirited speeches were made one after another: the students of Zengakuren (All Japan Federation of Student Autonomous Bodies) who had been arrested in the struggle of Hosei university, a Hosei university student who carried out hunger strike in protest of police repression, and a young workers who is resisting the planned construction of a US military base in Henoko in Okinawa. They all called on the participants to wage a militant demonstration, defying police repression and not fearful of being arrested. Workers of Japan Railway, education, postal service, municipalities, hospitals and other industrial branches talked about their fresh experiences of uncompromising struggle in the work place and spoke out their anger against the G8 Summit. 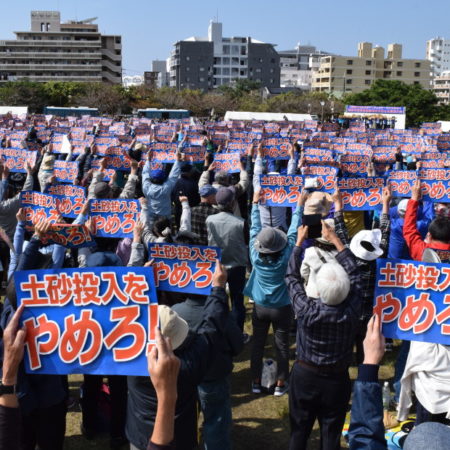