The Tokyo District Court decided on July 10 to admit extension of detention of 8 people arrested quite unjustly in the demonstration on June 29 in Shibuya, downtown Tokyo, to protest against G8 Toyako Summit.
This outrageous decision is totally impermissible. We resolutely demand immediate release of 8 comrades who are already in custody for almost two weeks under false allegation.

Colleague young workers and family members of the arrested 8 people gathered to the court to decide on the extension of detention. They together with the lawyers vehemently denounced the court decision to extend the detention.
The accusation against one of the arrested people is “violation of the public safety regulation” and other 7 people are suspected to have committed “interference with a government official in the exercise of his duties” Both charges are, however, totally ungrounded. In the court debate, one of the lawyers sharply criticized the court, saying, “Which is violent, the arrested people or the police” “You are arguing on a totally false recognition of the actual facts” “I must point out the court is rotten”. He took off his coat to show how he himself was injured by the police brutality in the demonstration on June 29.
Another outrageous procedure was carried out by the Tokyo District Public Prosecutors Office: it indicted Mr.SAKANO Yohei, who joined the demonstration in Hosei University on May 29 to protest against the university repression, under the charge of “trespassing the university building”. He was arrested on June 18 during his activity in organizing students for the June 29 demonstration after the arrest of 38 students on May 28 and 29. The total number of indicted students for their engagement in Hosei struggle amounts to 16.
On July 24 in Nakano Zero Hall(18:30?), a national protest rally is planned to “Crush repression on Hosei students” under the auspice of 3 organizations to fight together with Hosei students. Join in the rally and fight back the repression in unity with the comrades in prison! 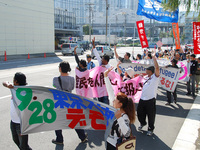